It was mid-April when I nervously, but excitedly, accepted a race entry to the Silver Rush 50 from Orange Mud. Now, as an avid trail and ultra runner, I knew of Leadville, CO but I didn’t really know they why behind the history of this tough race. Like the fact that the starting elevation for the race is 10,200 feet above sea level. Or the fact that most of the run hovers around 11,000 feet and peaks four times at an elevation just over 12,000 feet!  Umm, needless to say…that scared me a little.

I live at 2,400 feet above sea level and the surrounding mountains near me peak at 9,000 feet so I knew I could get in some decent training for this race. But, would that be enough? I was lucky enough to find a race about a month before Leadville that was 54 kilometers and entirely at 7,000 feet. I figured that would be a great little test for running at a slightly higher elevation. The Flagstaff Extreme Big Pines Ultra was so well organized, with 4 loops through a beautiful pine forest on a fairly easy to follow trail! I loved it, although, it was not an easy race! I didn’t taper prior to the race since I wanted it to solely be a training run! So my legs were a bit tired…and I fell five times! An average of 1.25 falls per lap! I have never fallen once in a race prior to this one.

It really got me questioning a few things?? Why wasn’t I picking up my feet? Was it a lack of oxygen to my brain? Was I tired?? Just a bad day? What’s going to happen when I’m 5,000 feet higher in elevation??

I still finished 4th overall female and felt fine with my time and that I was still in one piece after the many falls! I could have chased down the woman who passed me for third but knew I was just fine running my own pace and race that day. I mean, I felt great post race and ran another 10 miles the following day at 7,000 feet on the same trails, so it was a great weekend for Leadville training!

Upon arriving in Leadville, which is an absolutely beautiful drive from Denver, I woke up in the morning with a slight headache. I don’t ever get headaches and feared I would be affected by the high altitude. But, after I ate breakfast and got moving it went away. You just never know how you’ll be affected by the drastic change in elevation and I was keen on every sensation while I was up there!

Prior to the race I focused on keeping my iron levels up, eating nutritious food, sleeping enough (which is the most difficult for me) and staying hydrated!! The day before the race, I drank Nuun all day! Did you know you become more dehydrated at higher elevation? I didn’t want to start a 50 miler in a deficient state of hydration and did my best to avoid that from happening!!

Race morning arrived with all the jitters and excitement just like any other race! The start of the race is up a huge and steep ski slope! The first male and female to the top get a “golden coin” which guarantees their entry into the 100 mile Leadville race. I just took it at a moderate pace to the top of that hill knowing I had a long day ahead of me… however, I reached the top and saw stars. (Nerves plus a lack of oxygen, I’m sure!) So I slowed the pace and took some really deep breaths. Inhaling deeply through my nose and exhaling out my mouth. That little experience made me a little nervous, but I knew I could stay on top of it by just allowing myself to breathe and stay relaxed.

The course is absolutely beautiful and easy to follow! Wide dirt roads and super volunteers! The terrain could get a little rocky and a little technical, but not bad at all. I really enjoyed it! The views were incredible with snow capped mountains at times, green grass-filled meadows with colorful wildflowers and mountains all around! This Arizona girl fell instantly in love with Colorado!!

I ran a very conservative race. I’ve only done one official 50 miler before and certainly not at such a high elevation. My goal was 12 hours, but anything under that would just be awesome!!

At the main turn around point/aid station my TomTom watch that plays music through Bluetooth headphones died instantly. Luckily, I had a fresh Garmin and an iPod in my Orange Mud Endurance Pack. Hooray!!

I power walked up some of the big inclines, and tried to mix in some running since I’m a super slow power hiker! Like, really slow. I blame the short legs for this and I’ve tried different techniques. Yep, I’m just slow! I did great running down the hills through the rocky and steep terrain and felt pretty good the whole race.

I passed the last aid station and had just over 7 miles to go! I was ready to cross that finish line! Then around mile 48 or so, my Garmin died. At mile 49 my iPod died. I thought I was fine since I was so close. But mentally, I just unraveled. At one point, I could see and hear the finish line so I didn’t bother to put music on from my phone or to even check the time. Well, it probably would have helped, in hindsight. This race is closer to 52 miles and after seeing the finish line, the course took a hard right and downhill. No more finish line sounds or sights for what seemed an eternity. We switchbacked our way back up and up and finally could see it again! Then one last humongous downhill to the finish line! Don’t ask me how anyone had the legs to not collapse and end up rolling down this hill like a barrel!! It scared me, but I knew that finish line was right there!! I couldn’t wait to cross it!

What a feeling!! Over 50 miles of beautiful, challenging trails surrounding Leadville! I did it! I can do hard things! I can hit that wall, and beat it down with my bare fists because I want what is on the other side!

I finished in 11 hours and 48 minutes! Under my goal time, but not as much as I would have thought. I wish I could have pushed harder at the end, but I first had to get myself back mentally in the game. I was passed by quite a few people at the end. I think if I were to run this race again, I’d be so much better prepared for those last few miles!! But for now, I’m happy that it all worked out.

Did I feel the elevation? Lack of oxygen? Umm, yes!! But it really wasn’t that bad. A few times as I’d push up a big climb I felt “tingly” in my legs. I figured that was a sign of “low oxygen” supply, so I just slowed things down and focused on a few deep breaths. In through the nose, out the mouth. Once, twice, maybe one more time. It really helped!! I mean, I didn’t pass out! 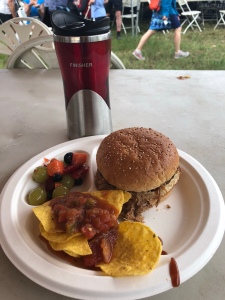 The food post race hit the spot. I had a pulled pork sandwich, some chips and salsa, and some fruit. I mixed in a little iced tea with my water and took a seat mingling with some other runners. Most of them from Colorado! They all did very well, some were returning runners, and others were using this as a training run for the Leadville 100 miler coming up in a few weeks. Impressive!!

I felt pretty good that evening and into the next day. I loved that the hotel I chose (Rodeway Inn) was right across the street from the start/finish! Made everything about race day that much easier! I had no problem using the stairs in the hotel (there was no elevator) and even dragging my luggage down all of those stairs the next day! Next time, I may pack a little lighter, if there is a next time!

Are you considering this race? Do it! Train for the elevation and the long climbs! If you don’t live at a high elevation, you’ll probably be just fine so don’t over think it! I’m glad I had a practice run at 7,000 feet and would strongly suggest doing something similar if possible. Leadville is a fabulous community with great restaurants & cute shops! Parking was easy and everything on that main street is within walking distance! Everyone helping out with the race has super-positive energy and were all very helpful!! Don’t forget to stop by the official Leadville Trail Series Store to pick up some one of a kind race souvenirs, too!! You’ll find that everyone you meet there is super friendly and helpful, too!

This race started in 1983 by a man, Ken Chlouber) who just wanted to bring something to Leadville to save his beloved town after one of the largest mines had shut down and the unemployment rate reached over 90%. His vision succeeded. People did come to challenge themselves at this high altitude, they ate at restaurants and booked hotel rooms. To me, that makes for a great story, an even better race and a community I want to support!!

He was at the start of the race with his shot gun to get us started and he was there at the finish to fire that gun once again to signal the end of the race! The cutoff time is 14 hours. I was there when the last runner officially crossed the finish line and it was a remarkable celebration. Ken gives an award called, “The Last Ass Over the Pass” to the last runner! Lots of pictures were taken and high fives slapped and it was a happy ending to one long and enduring day!! 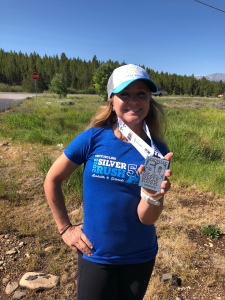 I feel grateful for experiences such as these. They make me a better runner and a better person. I come away from this race with a great appreciation for what my body is capable of doing, even when everything I’m doing goes against all reason. I get to carry that mental toughness with me post race, and that goes beyond any medal or t-shirt!

I am a personal trainer, land and water fitness instructor, Les Mills and Spinning Instructor and avid runner! However, I am most proud of how I balance my fitness and my family! View all posts by definingfitness